The Secret to Growing Your Affiliate Gym And it’s not what’s going to keep them at your gym for years to come.

Never is this truer than when we consider onboarding a new client.

Stumbling Upon the Secret

I didn’t always think that. When I first opened CrossFit Vancouver in B.C., the first affiliate in Canada—now MadLab School of Fitness—I thought I needed to sell new people on the movements we’d teach them. The method behind the madness was going to make them more fit than they had ever imagined they could be.

I patented what I called a “first day speech,” where I talked about Greg Glassman’s early teaching on ‘What is Fitness?’ My coaches, too, adopted this speech which went through the 10 general physical skills and concepts like doing constantly varied, functional movements at a high intensity.

It’s not that it didn’t work. My coaching staff and I used it to sell 10-15 personal training sessions up front before pushing our clients into the group class. People got fit, and our business did well.

But we soon discovered we were missing the point. We were forgetting about the emotional side of the process, which we now know is the most important part of bringing in, and keeping, any client.

What I mean is this: What’s truly going to get a new prospect to commit isn’t the promise of learning new technical skills and getting fit. What will produce a client for life is a solution to a real problem in his or her life—a problem that’s causing that person some kind of emotional pain.

That, and a personal relationship with a coach.

Here’s an excerpt from a recent Breaking Muscle story I wrote explains how I came to this realization:

“One client — a woman in her 30s I’ll call Megan (her real name is being withheld for privacy reasons) — completely opened my eyes as to what our training really was and where it missed the mark. What became apparent to me was that selling and delivering a single fitness methodology — one that is most commonly delivered in a group class — is woefully inadequate for addressing the fitness, and more importantly the emotional needs, of the vast percentage of the population. While the majority are not as extreme of an example as Megan, almost everyone over the age of 35 has, at the very least, some kind of a physical limitation.

It was obvious to everyone that Megan was anorexic.

On her first day, I gave her my patented first-day talk. We talked about getting her stronger and getting her a pull-up. She went through personal training and then she started coming to regular group classes.

Megan struggled in group classes because she clearly lacked the energy to get through the workouts. Everyone could see it.

One day, as she tried to change the workout and convince everyone in the class that it was too much, I said to her, “You know, Megan. One day, you’ll go out and eat a burger and fries three hours before class and you’ll be able to finish the workout.”

It was inappropriate. I knew that, but it had reached a boiling over point and that was my way of dealing with it. I had popped the bubble that nobody else had dared pop.

The rest of the class was horrible. Nobody looked at her because they didn’t want to make her more uncomfortable.

She was visibly upset and went over into the corner to work on her ring dips in a thick band. Then the band slipped and smashed her in the face. She burst out crying and ran outside.

I sat down next to her as she bawled.

“I’m anorexic, Craig. And I need help,” she revealed.

I realized at that moment how backward we had been doing things. We had been trained to sell the movements, personal training, group classes, and what we should have been selling was a relationship with a coach. All this time, we had been teaching people our methodology, but what we actually needed to be doing was figuring out what they truly needed to live a healthier, happier life.

That conversation I had with Megan on the bench outside that day needed to happen on Day 1.

This is exactly what our Day 1 introductory session is about today.”

Looking for more ways to grow your box? Download our guide How to Run a Stronger Affiliate Gym today!

Change the way you think about sales

More often than not, the five-letter word ‘sales’ causes people to cringe.

If you cringe when you think about being a salesman, it’s likely because you think sales is about convincing someone to buy something they don’t need.

But what if it were just a conversation between two people to get to the bottom of something? A conversation which explored whether you have a solution to the prospect’s problem. That’s likely why they showed up in the first place—because they have a problem and want to solve it.

Still not comfortable with that definition of the word ‘sales’?  Try replacing it with the word enrollment. Much better, right?

Enrolling someone is simple when you figure out how to discover what’s causing their grief. MadLab Group coaches refer to it as finding a person’s pain—their pain being the real reason they showed up to ask for help.

Finding Megan’s pain happened the moment she told me she was anorexic. Had I been able to get her to reveal that to me on her first day, I would have likely been able to help her a lot more than I did. By the time I found out it was too late.

This is why a client’s first experience at your gym shouldn’t always be a giant bring-a-friend free group class. What chance do you have at discovering a person’s pain in a big group of strangers?  If you’re still doing introductory sessions like this, then you’re essentially selling a workout.  That might work for a while, but it won’t last. It won’t allow you to find a person’s pain, and it’s certainly not the path to developing a relationship with a professional coach.

To truly make a difference in your clients’ lives, you need to sell a relationship with a coach to manage their personal health and fitness for life. That starts on Day 1.

The intention of our Day 1 is as follows: To discover if you the coach and the prospect connect. Then to find out if you can help them, and then to get a yes or no answer from them if they want to train with you. Because, there’s nothing worse than meeting with someone for an hour only to have them tell you at the end, “I’ll think about it and get back to you.”

This requires dead honesty. It requires looking the prospect in the eye and telling them all you expect at the end of the conversation is a yes or a no answer from them. Saying that really helps remove the elephant in the room and puts you both in a place of honesty.

Nothing salesy or dirty about that!

And more often than not, you’ll discover it’s the start of an open, trusting, professional relationship between the coach and client that will actually help the client gets what he wants both at the gym and in life.

Ready to take your box to the next level, download our How to Run a Stronger Affiliate Gym guide now! 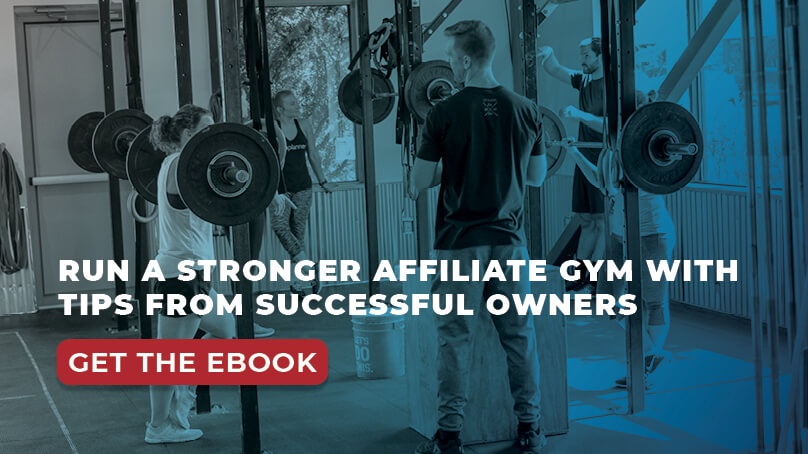 Craig Patterson, CEO of the MadLab Group and Owner of MadLab School of Fitness

After earning his Mechanical Engineering degree, working for two Fortune 100 companies in business development, starting a green building design firm from scratch and selling it, Patty decided to try his hand in the fitness industry.

Patterson was a true pioneer in the early years of CrossFit – so early that when in Vancouver, Glassman slept in Patty’s bed and Patty took the couch. Greg was Patty’s mentor from 2004-2011 and has dedicated his life to professionalizing the fitness industry so coaches and owners can make the same living as engineers.

Patty is the CEO of MadLab Group and the owner of MadLab School of Fitness in Vancouver. The school has a strong staff of professional coaches (3 have been there for over 12 years) and a great gym. The place runs itself so he spends his days working with gym owners and coaches around the world and tormenting his staff at MadLab Group with his endless rants.