Three Creative Yoga Marketing Ideas to Try at Your Studio

In four short years, the number of yoga practitioners in the United States has skyrocketed, from 20 million in 2012 to more than 36 million last year. And those yoga devotees are spending more money on yoga classes, clothing, equipment and accessories than ever before, approximately $16 billion, up from $10 billion in 2012.

The growing interest in the practice of yoga, according to the same study from the Yoga Journal, shows no signs of slowing any time soon. More than 34% of Americans surveyed reported that they were somewhat or very likely practice yoga at some point in the next year. That’s more than 80 million Americans planning to spend an average $168 a year on classes, gear and equipment, and looking for a great yoga studio to help them begin their new devotion.

As Alice Walton, who covers health, medicine and psychology for Forbes, notes,
“It’s pretty accurate to say yoga has taken the country by storm. And the popularity of the practice is visible in lots of ways: in the sheer number of yoga studios in the U.S., in the amount of yoga gear that’s for sale at all kinds of retailers and even in the excited conversations about yoga and meditation practices you can overhear in public places, at least in big cities.”

For tips on marketing your studio, get our free 10-Step Yoga Marketing Guide

If you currently own or manage a yoga studio, or if you’re planning to open one in the near future, that means you have a tremendous opportunity, but it also means you’re likely to face a lot of competition. You need a smart plan to market your studio, because unless you’re effective in getting the word out, you’re not going to achieve the success you’ve dreamed of. Here are three effective marketing strategies that have worked for other studio owners.

While we recommend against offering discounts, promoting a free class to new students can help bring people through the doors, but you need to be careful that you find a way to bring them back. As Jonathan Fields, who owns a yoga studio in Manhattan discovered, “You want your studio to be buzzing as early in the process as possible. But there’s a delicate balance between offering free classes and undermining people’s perceptions of the value of the service you’re offering.”

Bring newbies in with the free class and entice them to join your studio by offering a one-month onboarding program for yoga first-timers. Promote this membership option to all drop-ins, selling it as the best way to get comfortable with common poses in a non-intimidating atmosphere. Consider offering this at a lower price point than your regular memberships. This will help bring people in with a lower commitment, allowing you to show them the true value they receive by practicing at your studio.

2). Get the Attention of Local Media

A good story in your local paper or TV station has the ability to reach a large pool of prospective students, and it has the added benefit of being free. You can capture the attention of local media by getting creative. Be Yogi recommends inviting reporters to a studio event or fundraiser, then using the opportunity to tell them about the benefits of yoga and the good work you’re doing in the community. You should also write occasional press releases (for example, about special events, a new seasonal schedule or an upcoming contest). Send your press releases to local publications and those that cater to fitness and health.

We talk about the power of referrals a lot here at Zen Planner. That’s because 92% of people trust recommendations from their friends and family and word-of-mouth generates more than two times the sales of paid advertising. We recommend developing a referral program that rewards both your current student, as well as their referral to see the best results possible.

The rapidly increasing interest in yoga represents both an opportunity and a challenge. With more Americans taking up the practice each year, your target audience is growing, but so is the number of other studios with whom you must compete. To differentiate your yoga studio in this increasingly competitive market, create a smart marketing plan that thinks outside the box and does things your competitors aren’t doing.

Looking for additional marketing tips? Get your free copy of our 10-Step Yoga Marketing Guide. 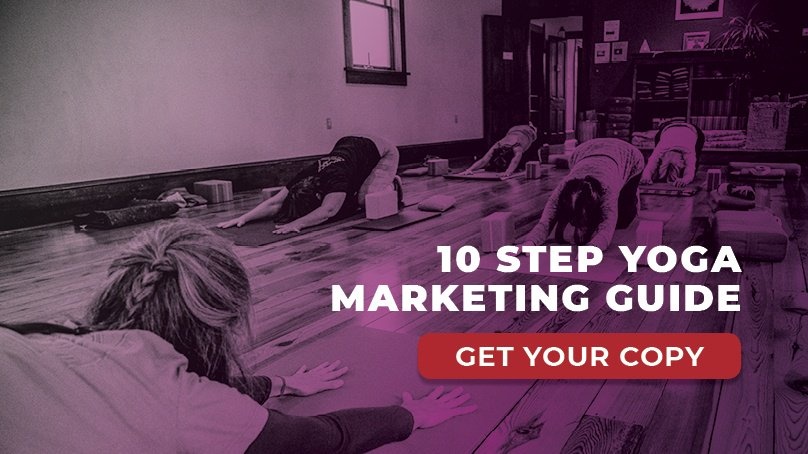